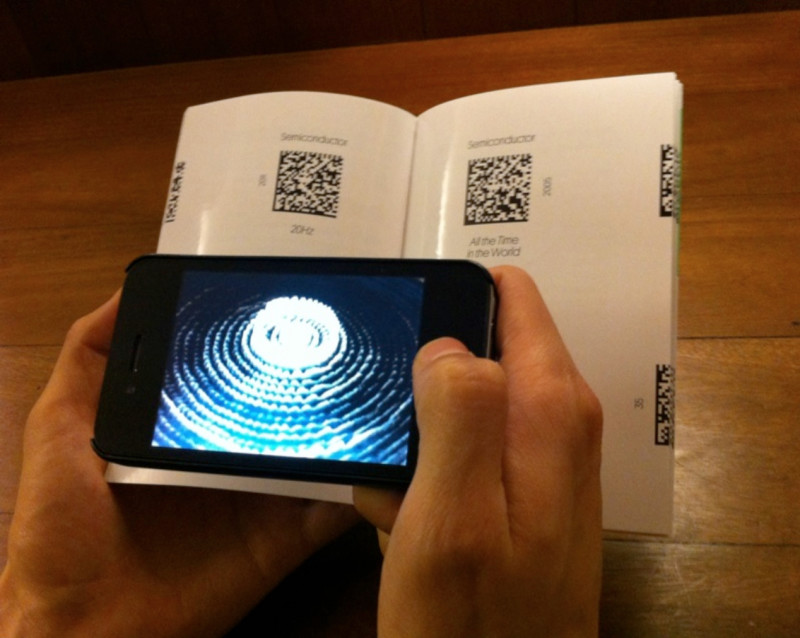 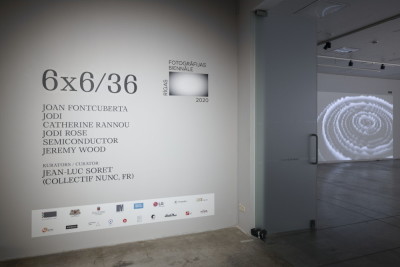 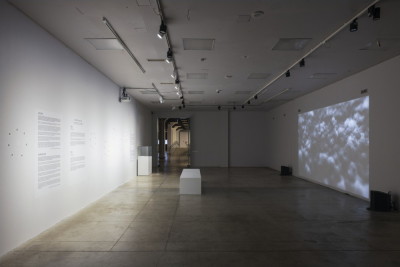 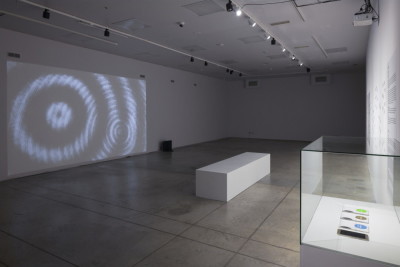 Pictures above :  videoprojection of 20Hz from Semiconductor

Please find below the interview I gave to the reporter Māra Uzuliņa from LSM.LV, Public broadcasting of Latvia about 6×6/36 Landscape exhibition that I’ve curated under NUNC Collective’s umbrella for the Riga Photo Biennial :

M.U: What is the message you want to send through this exhibition?

JLS : The 6×6/36 project has no « message » to deliver. It is, more modestly, an open invitation to everyone to make their own exhibition based on the works we have selected. 6×6/36 is at the same time a small catalogue of works, a collection of QRCode stickers that you can stick wherever you want and that allows you to access works visible on your mobile phone. The NUNC collective (Clarisse Bardiot, Annick Bureaud, Cyril Thomas and I) just wanted to experiment with a new form of publishing and exhibiting digital works. We assumed that an alliance is possible between exhibition and publication. Much more than just being associated in some way, they fuse together in the form of notebooks that can be carried in a pocket or bag. It’s up to the reader to explore the artworks on offer, but also to use stickers to curate his or her own exhibition, which can then be shown in a private space (e.g. a living room or kitchen) or a public space (e.g. walls, advertising hoardings, public transport, etc). 6 x 6 / 36 provides an alternative to traditional museum codes, moving away from the system of the “white cube” and familiar methods of mediation. By creating alternative links between artwork, subject and object, 6 x 6 / 36 creates new ways of approaching the notions of exhibition, dissemination and reception.

M.U : Why did you choose to use QR codes as a tool for the visitors to get involved?

JLS : We have used QR Codes for several reasons:
-To divert their usual commercial use for artistic purposes.
-To publish a catalogue where no work is (immediately) visible; this is strictly speaking a QR Code catalogue. Each barcode is only a path to the artwork via its mobile interface.
-Scripting the access to the work. There is a dimension of surprise for those who scan the QR Code, a little as if each exhibited work had its own showroom. Here the room is the very small format of the screen of your mobile phone.
-Delegate our curatorial role to those who play the game of hanging the self-adhesive QR Code in places that create resonance with the work on display.

M.U : Were the artists happy about this kind of sensing and discovering process of their work?

JLS : I don’t know. But curious about new ways of exhibiting their work yes! This is why each of them has followed us in this experimental adventure, which has moreover been selected by the Ministry of Culture and Communication within the framework of its call for projects on innovative cultural digital services.

M.U : How the artists were chosen for the exhibition? Have you already worked together?

JLS : For this issue of 6 x 6 / 36, devoted to the landscape, we have selected six artists — Joan Fontcuberta, Jodi (Joan Heemskerk & Dirk Paesmans), Catherine Rannou, Jodi Rose, Semiconductor (Ruth Jarman & Joe Gerhardt) and Jeremy Wood — who explore and play with different definitions of the notion of landscape using a range of sometimes infinitesimal shifts and variations. 6 x 6 / 36 – Landscape focuses on the way technology, media and interfaces renew and broaden standard notions of landscape and the picturesque, creating a shift in the perceptions and position of the viewer. I’ve already exhibited Joan Fontcuberta, Catherine Rannou and Semiconductor at MEP and elsewhere but for the other selected artists it was my first collaboration.

M.U : What are the most important rules for contemporary photography? Are there some? I think it’s less popular than other contemporary arts.

JLS : If we speak of « rules » in photography, it would be, for example, to quote those defined at the end of the 1960s by the Becher at the Kunstakademie in Düsseldorf in relation to the so-called German photographic objectivity or the Düsseldorf school : the object must be framed entirely. The camera must be centered horizontally and vertically. Photographs are taken in winter, in gray weather to avoid cast shadows or tormented skies which cloud the rear shot. Activities, human anecdotes, foreground effects, color, blurs, reflections and other artistic effects, off-center shots, abstract or pitorresque compositions, short focal lengths that distort the image are prohibited, etc.). This filiation has spread to contemporary photography with artists such as Andreas Gursky, Thomas Ruff and many others.

But if we look at contemporary photography as a whole, I would therefore not talk about rules, but rather about schools, currents or trends such as practices that can be described as « post-photographic ». The proliferation of images on the Internet, in cyberspace, in augmented reality or virtual reality is shaping a new imagination and new photographic and curatorial practices that are exciting to explore.

I would not say photography is less popular than other contemporary arts, I find on the contrary that photography is one of the most widespread (artistic) practices in the world since the appearance of smartphones. Historically, it took time for it to establish itself as an artistic practice, but now its influence, even its hold, is global, inter-generational, inter-cultural and concerns all social strata around the world. The phenomenal place occupied by the image through social media, in particular, is one illustration of this.

There is this tendency that everyone who has a camera is a photograph. And sometimes you can hear this in the context of contemporary photography. Can you put some arguments against this?
No I won’t put arguments against that ! On the contrary, I would say that many contemporary artists use the mass of existing images accessible on social networks, for example, to move the creative process of the image not into the shooting but into what could be called « an aesthetics of process ». For example, with his « Googlegrams » (exhibited in our 6×6/36 notebook) Joan Fontcuberta does not « take » any pictures. He uses the Internet, the almost unlimited stock of images available via Google’s databases, combined with photomosaic software to create his final images. It is these types of practices that can be described as post-photographic. The creative act is no longer situated in the shooting as such, but in the aesthetics of the process that leads to the creation of an image. In the case of Googlegrams, it is a composite image; each image created by Fontcuberta is composed of thousands of images (8,000 to 10,000) that have been produced and put online by anonymous people.

M.U : Have you thought about the future of photography? How will we perceive this medium in 10 or 20 years?

JLS : I have no idea of what will be the future of photography. The phenomenon of acceleration that we are experiencing with the convergence of NBICs (Nanotechnologies, Biotechnologies, Computing and Cognitive Sciences) so highly valued by the promoters of transhumanism, announces such radical changes in our relationship to the real and virtual world and therefore in our relationship to the image that it is just as stimulating as it is worrying to imagine the future of the image. If we add to this the insidious, massive and invasive development of surveillance technologies such as facial recognition, the future of the image that inspires me the most would rather be that of its disappearance, its erasure, an escape of the panoptic world that is being prepared for us.

The interview in Latvian here : https://www.lsm.lv/raksts/kultura/kino-foto-un-tv/kabatas-maksla-katram-sava-viedtalruni-saruna-ar-kuratoru-zanu-liku-sore.a375971/?fbclid=IwAR2YNWXK5-gvE3B6UbQLrMuQVUGF_Nn517o1R2F37kWuv0FdW6sNmXC9zZo)